Haunted by the carnage: French gendarmes testify before the trial of the Paris attacks 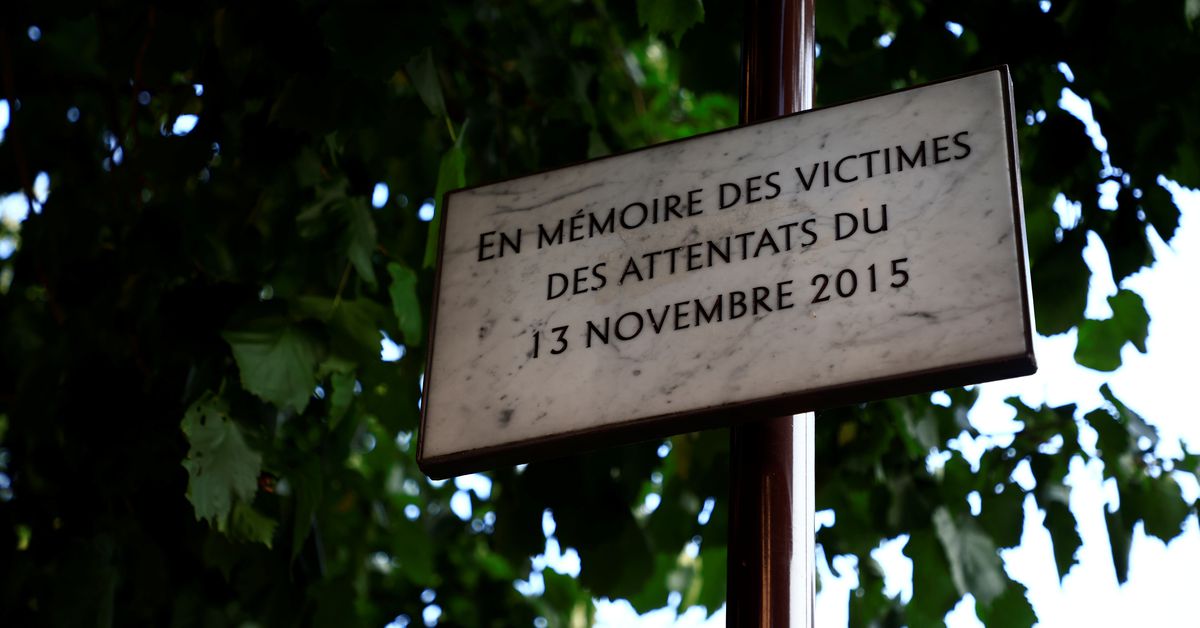 A commemorative plaque for the victims of the November 2015 Paris attacks can be seen near the bar and restaurant previously named Comptoir Voltaire in Paris, France, September 1, 2021. Twenty defendants will stand trial in the November 2015 Paris attacks from September 8, 2021 to May 25, 2022 at the Paris courthouse on the Ile de la CitÃ©, with nearly 1,800 civil parties, more than 300 lawyers, hundreds of journalists and large-scale security challenges. Photo taken on September 1, 2021. REUTERS / Sarah Meyssonnier

PARIS, September 28 (Reuters) – Six years after a group of Islamist bombers and gunmen attacked Paris, gendarmes on duty that night told a court on Tuesday that they were still haunted by the sound of explosions, images of human flesh and the smell of blood.

Three suicide bombers blew themselves up outside the Stade de France where the national football team played against Germany as other Islamic State militants hit bars, restaurants and a concert hall in the center of the capital on November 13, 2015.

The attackers killed 130 people in total.

Philippe, who had been in the force for 33 years the night of the attack, told the surviving primary suspect’s trial how he heard an explosion right behind him, turned around and saw smoke and a bare leg.

â€œAt first I thought, ‘But what is that display mannequin doing over there?’ … I can still see that leg very, very, very clearly, “he said in one of the earliest testimonies from witnesses and survivors of a trial that is set to last for months. Read more

He said he and other police officers on duty at the stadium had been trained to deal with extraordinary situations, but the carnage that night was beyond any training manual.

“That night, and that’s why it stays with me day after day, we were blowing up, and we first had to absorb the shock, figure out what was going on and improvise, before our reflexes kicked in. resume, “he said. .

â€œWhat still haunts me is that I was in charge that nightâ€¦ we did our best,â€ he said sobbing.

A second officer, Renaud, had returned to duty that night after a break on paternity leave. “It’s not over and I don’t know if it will ever be,” he told the court.

Pierre, now retired from the force, said he spent a month in a mental hospital and is still in treatment.

“I was rocked by the second explosion, saw a human trunk cut in half, pieces of flesh everywhere, and that smell of blood … when I got home my shoes and clothes were full. blood, â€he told the court.

He said he still had trouble eating and sleeping as he relived the footage of the attack.

“That night the terrorists spread terror not only among the victims and injured. My wife, children and all family members were injured by this attack … this is what the court must take into account, â€he said. .

The full names of the agents have not been released, in accordance with a court ruling.

Questioning of the defendants will begin in November, but they are not expected to testify on the night of the attacks until March.

Defendant Salah Abdeslam, 31, is considered by prosecutors to be the only surviving member of the Islamic State cell that carried out the attacks.

Thirteen other people, 10 of whom are also in custody, will be in the courtroom charged with crimes ranging from supplying weapons or cars to attackers to planning or participating in the attack.

Six others, mostly Islamic State officials, will be tried in absentia for helping to organize the attacks.

Daily News: Is Your Little One Chic Enough For Rank, Tom Brady’s Brand New, Kim Kardashian’s Met Gala Outfit Could Be Your Next Halloween Costume, And More!