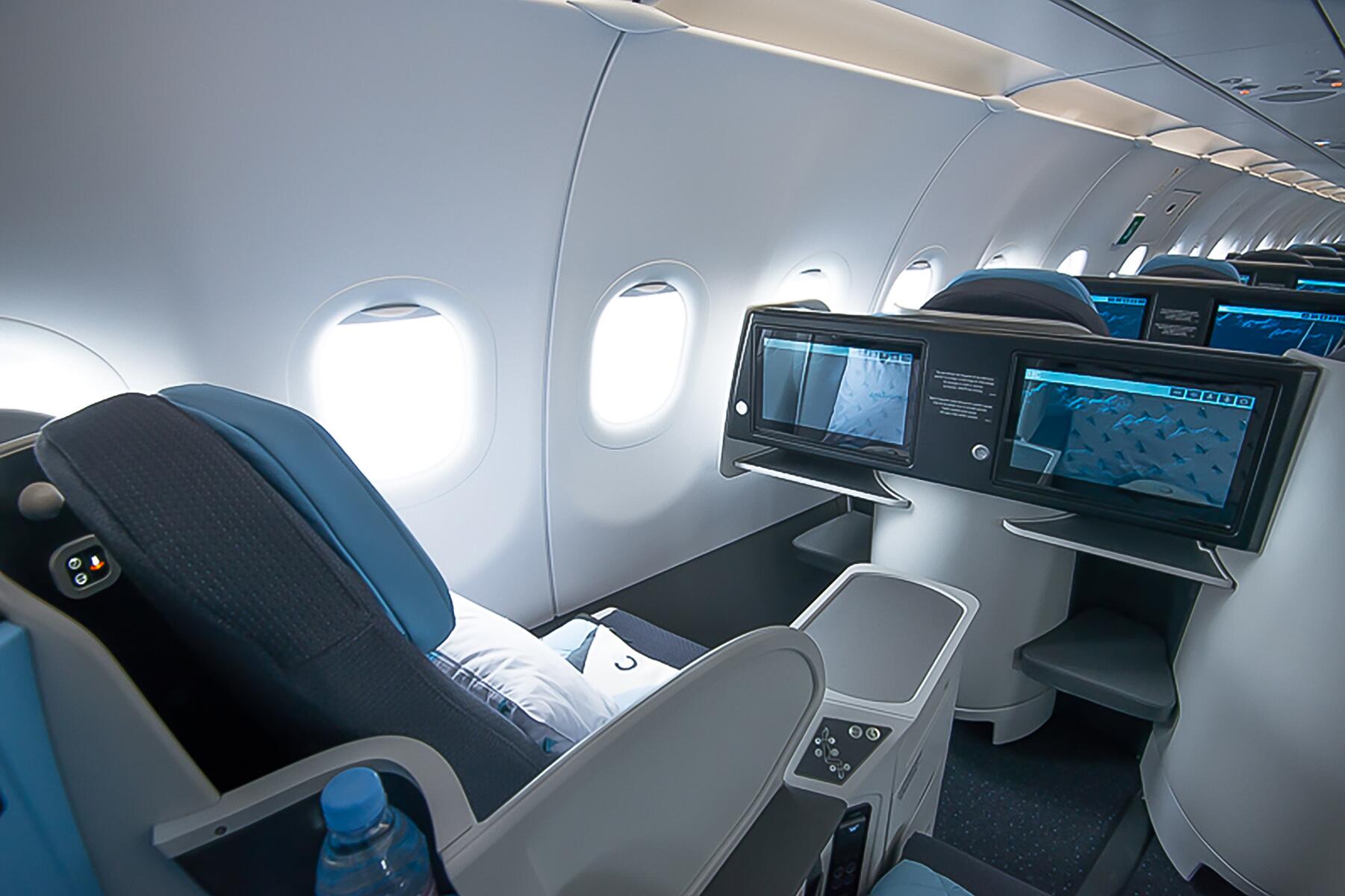 It’s the cheapest way to travel in style to Italy.

Flight time from Newark to Milan is approximately eight hours and twenty minutes. Via La Compagnie is a largely happy experience to start with.

The company is not a new airline – it debuted in 2014 – but the all-business class flight, 76 seats in total, has a new route. It runs directly from the New York metropolitan area to Italy’s fashion capital. The new service was celebrated at a launch party in Manhattan in March, and a few weeks later I had the opportunity to experience this swanky airline for myself.

The history of La Compagnie is not without appeal. Past reviews, especially of its older, repurposed aircraft (Boeing 757-200), weren’t exactly glowing. Seats reclined but did not lie flat and service was rated as good but not outstanding, while the food was not worthy of praise.

Continue reading the article after our video

Yet the cost of business flights via the French airline was – and is – remarkably cheap compared to the cost of a business class ticket from New York to Italy via one of the major carriers like Delta, where recent research showed a comparable Delta One class. tickets at $9,596 and La Compagnie at $2,030. Now that La Compagnie has added new planes to its restricted fleet, it’s easy to make the case for flying at the upper echelon of airline travel. 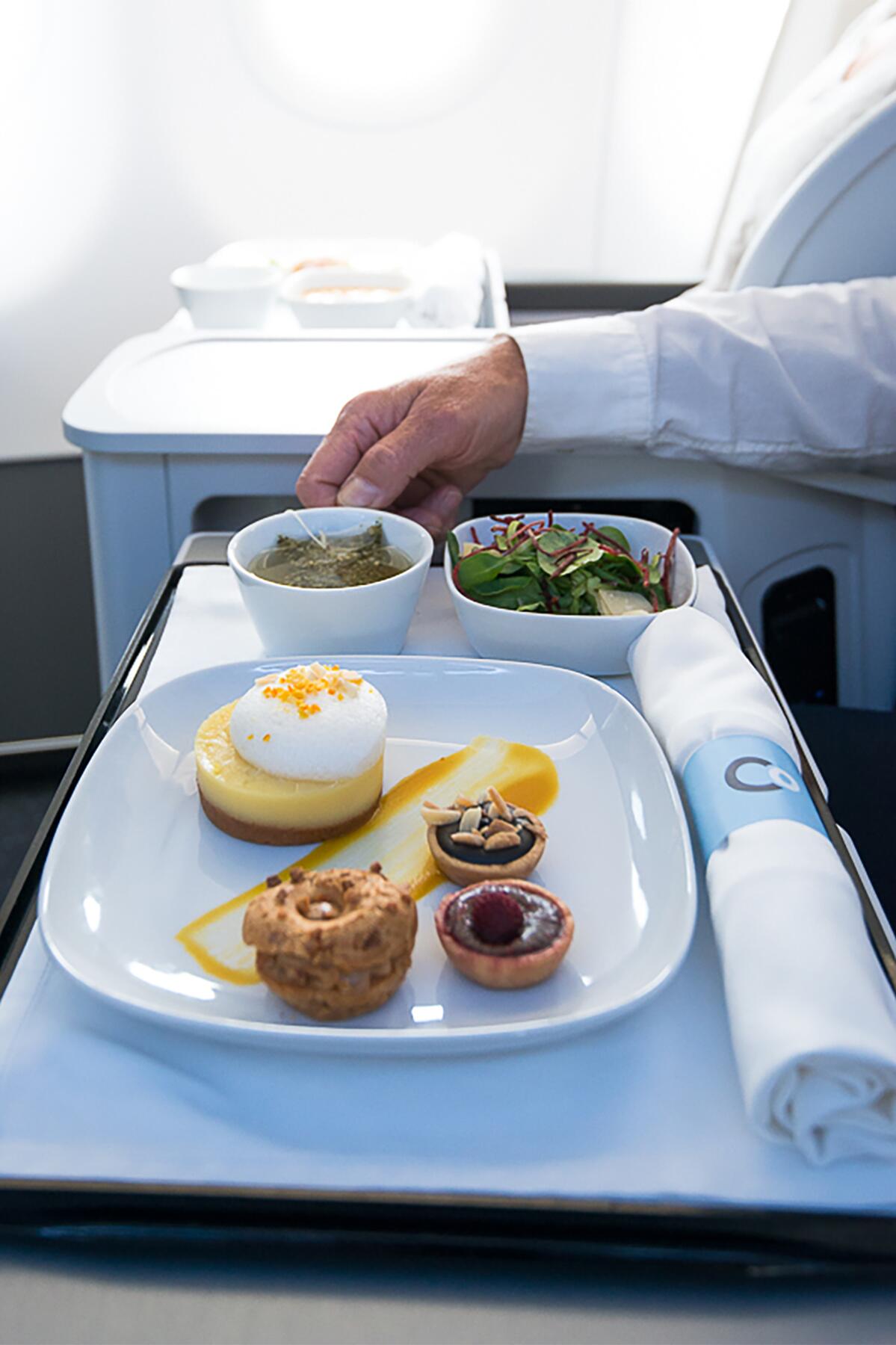 “The Company is aimed at a population of travelers who want to travel in high-end style but who do not pay high-end prices”, explains Christian Vernet, president of the airline. “From the beginning, our promise has been to offer travelers uncompromising service at the most attractive rate… This is the closest thing to a private flight without the price tag.”

On the new route from Newark to Milan, which began in mid-April, travelers are provided with an all-new aircraft (a 321neo) outfitted in the company’s signature soft blue and pale gray hues. It’s a soothing sight after having a drink in Newark’s garish and musty Virgin Lounge, a supposed perk for La Compagnie ticket holders.

The seat shells, arranged in pairs on either side of the single-aisle, are spacious and comfortable. That said, those used to flying business class on overseas routes or from NYC to LAX on one of the major carriers won’t find too many surprises here. There’s the standard pillow and blanket (although the Company’s quilted blanket may be slightly higher quality than that distributed by Delta or United), large over-ear headphones (these are just ok; if you have your own noise canceling Bose or Beats, you’re better), a bottle of water, a cute toiletry bag stocked with the usual suspects – foam earplugs, socks, a toothbrush and toothpaste – and surprisingly – lip balm and cream for hands and nails Caudalie.

Boarding is child’s play. That would be true on a full flight of any plane with so few seats, but on a recent Monday evening in April, boarding and settling into the quarter-full flight proved particularly straightforward.

Many airlines demonstrated their creativity through their required safety video, and La Compagnie joined the competition. Her zen video is performed by two yogis, who stretch and move with agility in voiceover, and video captioning explains how to get oxygen and buckle up properly.

On the night flight, a light meal is served shortly after landing, and on the day of return, a full four-course lunch. On both flights, there were only a few delicious bites of sweet potato soup and lemon pie. Still, just about everything else was disappointing: a soggy Caprese sandwich, rubbery cod, overly salty smoked tuna.

Fortunately, Milan is a city that takes its food and drink seriously, and if you arrive hungry, you won’t stay that way for long. As if ordering a Negroni in the Brera district while waiting for a table at the dear Latteria San Marco and having it arrive in a huge tumbler wasn’t enough, think of the appetizer snacks that sit alongside: gourmet green olives, slim, salty potato chips and oily Marcona almonds. With snacks like these, who needs an appetizer?

But Milan is not a place of deprivation. This is one for fun and discovery. The city is rarely, if ever, spoken of with the same adoration given to other Italian cities like Rome, Florence and Venice. It’s not often cited as an Italian place people really want to visit, like Sicily, the Amalfi Coast or Lake Como, but unless you have an aversion to eating next to locals, visiting art galleries and designer showrooms and shopping at one of the – sort of a vintage find with Milanese on their lunch break, skipping Milan for other Italian pastures is ill-advised.

Venice is only two and a half hours away by train, Romejust over three, but don’t worry: these tourist-heavy Italian cities will still be around after you’ve spent a few days exploring cosmopolitan Milan.

Every city has its fair share of excellent hotels, and Milan is no different. Big spenders wanting to be at the center of it all, near the gob-smacking Duomowhich is literally the downtown area of ​​the city, will not be disappointed with the Park Hyatt’s accommodations. Galleria Vik offers a unique stay for something a little different and just as close to the main action. Each of the establishment’s 89 rooms, the first in Europe for the South American brand, features the work of an artist. No two rooms are identical in decor or layout, with dozens of rooms overlooking the Galleria Vittorio Emanuele II.

From Galleria Vik, where the enthusiastic and helpful staff make up for the style flaws of the guest rooms, it’s just a short 10-minute walk to Brera, an area teeming with students and vintage shops. The wares at some, like Pauline Frommer and Vintage Delirium, with their lightly worn Dolce & Gabbana dresses and Versace jackets, aren’t cheap, but Urzi, run by a husband-and-wife team, is the kind of little boutique that will get you there. makes you happy to have taken the vintage course. It’s also affordable – jewelry hovering around 40 euros, a spring blazer with sharp stripes for 45 euros – and far more original than shopping along Via Monte Napoleone, home to Prada, Balenciaga and Fendi, for n to name a few. -the retail locations found here. Speaking of Prada, the Foundationon the outskirts of town, attracts visitors largely because of the café designed by Wes Anderson, Bar Luce.

Milano & Partners recently unveiled the YESMilano campaign with the aim of showcasing all that Italy’s second largest city has to attract visitors. Sure, Milan is the gateway to much of Italy and much of Europe, but it’s absolutely charming and inviting in its own right, the city’s promotional arm promises. An ongoing initiative highlights distinct Milan neighborhoods, such as City Life, where lunch at Ratana, a sustainability-focused restaurant with outdoor tables, seems like an even better idea once you realize you’re sitting among locals. Bone marrow risotto, a staple of Milanese cuisine, is the thing to order here, its bold yellow hue resulting from saffron, a signature seasoning of this region.

This being Italy, the fun doesn’t stop at the main course. Not when there’s so much ice cream around. Visitors to New York miss the Italian gelato outpost Gromwhich closed several years ago, will be delighted to find their favorite flavors like fior de latte or pistachio in the streets of Milan.

Milan’s nightlife technically begins at happy hour when employees wrap up their shifts and head to the nearest spot for an aperitivo – this city will have you falling for Italian bitters like Campari and Select Aperitivo – before to enjoy a multi-course meal followed by after-dinner drinks. Visitors looking to soak up the energy and buzz that lately define Milan should head to the Canal District, where hotspots like Mag Cafe are in high demand. The pizza and the house red at Fabbrica Pizzeria are particularly pleasant when combined with the sunset over the Naviglio Pavese canal. Here you can marvel at everything Milan has become. Venice can wait another day.